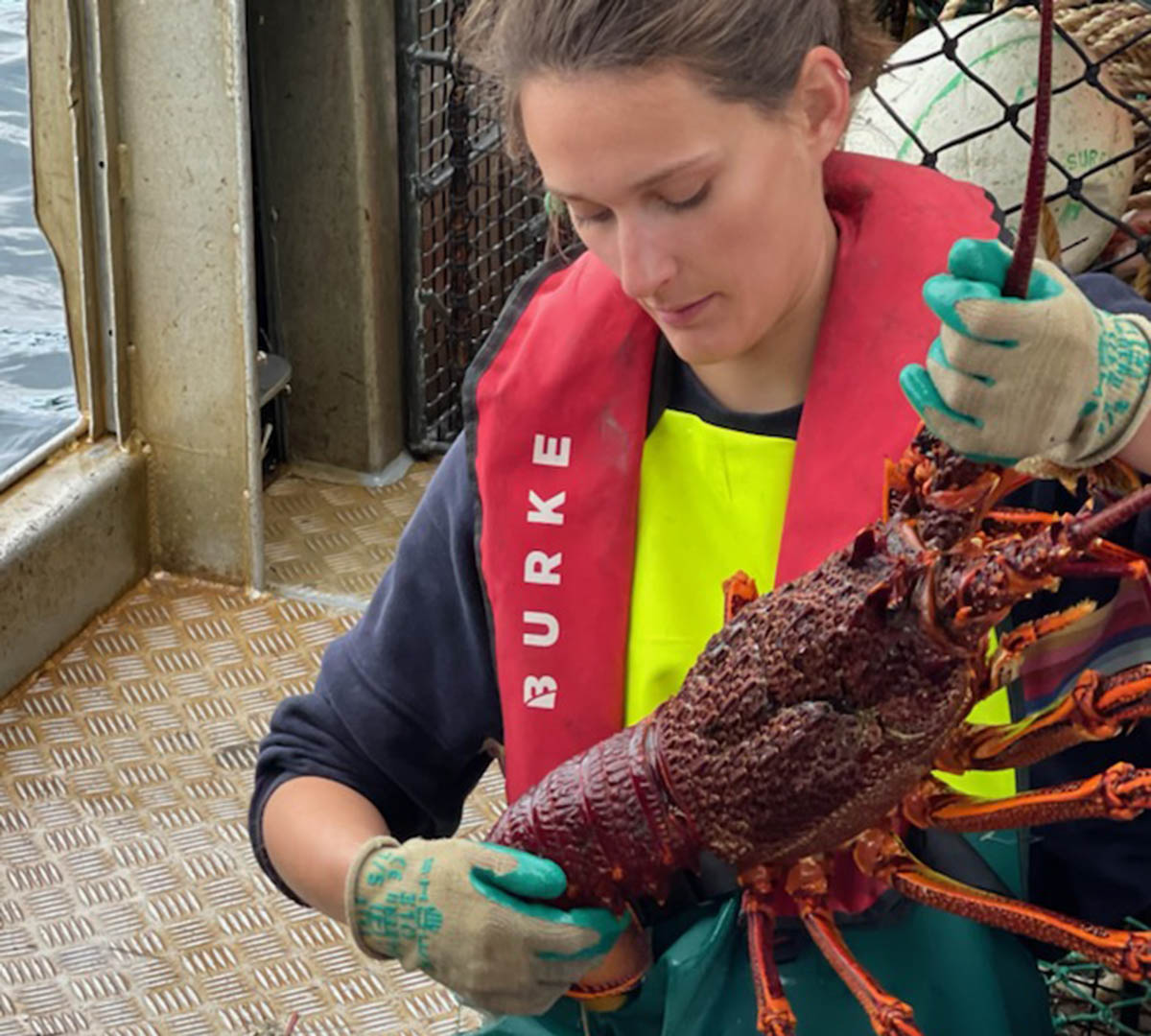 Jennie Smith started her PhD in Marine Biology at the University of Tasmania in September 2019. She is studying the role of predatory Southern Rock Lobster in controlling the range-extending, kelp destroying Longspined Sea Urchin along the East Coast of Tasmania.

“I studied biology for my first degree, which was a four-year integrated masters at the University of Sheffield. It was very much biology as a whole, lots of terrestrial stuff as well as a bit of marine. For my masters project I did a project about tropical butterflies in the Amazon, up and down the Andes mountains.

“I contacted some supervisors and applied to join a couple of projects but didn’t get very far with any of those enquiries or applications. I also applied to some PhDs in the UK. I was applying for jobs by this point too, though, and got a great position at the Institute of Zoology at London Zoo. I worked there for a year as an intern. I got paid a bit – which was nice! – and did a year’s project on a subject called species on the move, which is about the idea that with climate change and temperatures rising in different places, species that are adapted to their environments might need to track the climate in which they evolved. It was very much in line with my butterfly project because that was about adaptation to altitude and temperature, which was something that I then looked at in the new project.

“I was very well-mentored while I was there – there are a lot of PhD students at the Institute – and I was given a lot of really helpful guidance on things like how to tailor your CV and each application to the specific project I was applying for. It was invaluable really.

“I found my PhD advertised in a random email newsletter and it immediately looked super-relevant. It was marine, it was about species on the move – it was to study a species of sea urchin that is moving southwards into Tasmania. As part of my project at London, I was already working on a paper with a researcher who works at the University of Tasmania, so there were connections all over the place. When I emailed the supervisor here I felt super-qualified to make the application; it was all very much the right place and the right time.

“Before that, though, I felt as though I’d keep getting close and then a piece of the jigsaw wouldn’t fit; something didn’t work. I’d get accepted into a PhD, but then they wouldn’t give me the scholarship, for example. I must have applied for about 15 PhDs, both in the UK and in Australia. It takes up so much of your time! And it’s quite a brutal process – you put your heart and soul into a research plan, but then it’s a completely different project in the next application. It took me about two years I think, and I know it takes some people even longer.

“I’d done a lot of fieldwork and projects abroad before, leaving home has never been a big issue for me. I didn’t know too much about Tasmania before I came, but when I started looking into it everything talked about camping and surfing and hiking and diving and I thought – I’ll be fine! Even though it has turned out to be a different experience to the one I was expecting – COVID has meant that I haven’t been able to go home for a very long time, and my family and friends have not been able to visit me here – I think I’d still have made the same decision to come if I’d known what was going to happen.

“My office is in Taroona, a little suburb of Hobart. The view from my desk is of the sea! It’s pretty glorious. In summer we go down for a swim, I’ve got a paddleboard so I go out on that, we have lunch barbecues on the beach – I can’t even stop myself from bragging about it to my friends and family. It’s super nice, I feel very lucky!

“I’m in an office of six PhD students and we’re all doing different – though similar – things. This is the University’s Fisheries and Aquaculture research centre and there’s a big experimental aquaculture facility here, where I have experiments running. In one sentence, my PhD looks at what a lobster’s favourite food is, and how this could be useful in controlling pest sea urchins and stopping them from destroying Tasmania’s kelp forests! To do that I have an area in the aquaculture facility where I have 30 tanks set up – just for me, my lobster hotel! The other fieldwork facilities are also pretty amazing. There are so many boats and so much dive gear! It’s all stuff I’d never really imagined, coming from a non-marine academic background, I didn’t even realise it was possible to have access to this level of equipment and these facilities. I feel very supported in all of that.

“The University also gives me amazing access to fieldwork. The coastal area you can see from my office window is one of my study sites. It’s a marine reserve and has loads of lobsters, so we’ve done shore dives from the office. I can access everything I need for my project very easily. It also feels important to be based where my project is making an impact – rather than in the UK studying an ecosystem in another country.

“I would love to stay here after my PhD. I’ve fallen in love with the city; I’ve made lots of friends here – it’s where I want to be. This is also such a specialised area – not only is there the University and the IMAS centre, but also the CSIRO Marine Deposit and the Australian Antarctic Division, so there’s a really high-density of marine studies going on here. I know I want to be in this field, but I’m not set completely on doing research or staying in academia, I’d consider commercial roles too and I love outreach and teaching. I just know I’m very keen to stay in Tasmania.”